Whether bicycles are donated for transportation to and from work, as a gift for a child, to help a homeless individual or shipped to fulfill needs in another country, the bicycle ministries of four Florida United Methodist Churches have far reaching benefits to people of all ages. 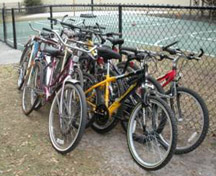 On February 21, 2010, 11 bicycles were loaded into a container at Wellspring United Methodist Church to go directly to Haiti with a full load of food, clothing, and blankets. Initially, it was thought there would not be enough room for any bikes in this shipment. When room was found, the dash was on to get them to the container.

Within the same week, we connected with Magical Charters in Odessa. Magical Charters runs bus tours and was collecting supplies to go to Haiti. They work with Agape Ministries in Venice, FL, affiliated with the Agape Ministry in Haiti.Bicycles on Magical Charters In order to facilitate shipment of donated materials, it is essential to have a source on the ground to take responsibility for the items shipped over there. 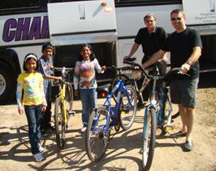 On March 9, 2010, two of their coaches set off for Venice, full of aid, plus 10 adult bikes donated by our Bicycle Ministry. Two days later, they were loaded onto a chartered flight to Puerto Prince, by Apage Air, and are now in use. AGAPE Flights 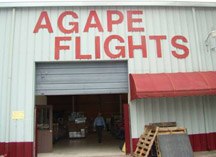 Kassie Newman from Magical Charters reported that aid workers were dancing in the streets when they heard they were getting these bicycles because transport is very limited. Agape Ministries has asked for 26 more bicycles. In that same month, the Bicycle Ministry refurbished 21 adult bikes and sent them on to Haiti. 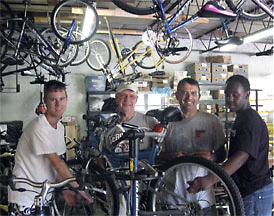 Before the Jan. 12, 2010 earthquake in Haiti, the Rev. Guerry Lefranc called 56 orphaned children “my kids.” Now, he says, he could easily be father to 200 if he had the resources to care for them.
“We feed as many people as we can each day with bread and sugar water. Then, we close the door and cry, while the others beg and plead,” he said. Lefranc is director of United Methodist-related Zamar Ministries near Croix-des-Bouquets, Haiti, which operates a school, church and clinic. He is also the brother of the Rev. Tamara Isidore, pastor at Friendship United Methodist Church in Clearwater and a member of the Florida Conference’s Haiti- Florida Covenant task group. Lefranc says the earthquake devastated his parish, located near the airport in Port-au-Prince. He says people there have received tents, but no other help from the government or Red Cross, despite the fact that supplies are relatively close by. Problems associated with distributing donated supplies have prolonged people’s suffering, Lefranc says, forcing people to live in tents and beg for food. Several Florida Conference churches are helping fill that gaping hole of relief. They’re providing food and supplies, but also another much-needed item — bicycles. One of the first big projects of the bicycle ministry at East Lake United Methodist Church in Palm Harbor was refurbishing bicycles for Haiti. Read more here. (PDF File: size 5.46MB)

To make a donation to ToyMakers of East Lake please click here.

To volunteer at ToyMakers of East Lake please click here.